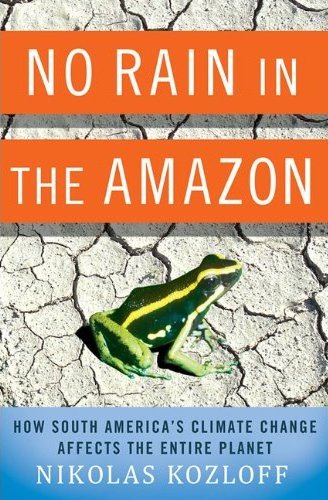 No Rain in the Amazon: How South America's Climate Change Affects the Entire Planet

In the Global North many are not aware that global warming has already exacted a huge toll on people living in the tropics. In this book I look at the cost of global warming in South America, principally through the lens of two large countries -- Peru and Brazil. In the former country Andean glaciers are melting at an alarming rate, endangering water supplies. What’s more, Peru has been reeling from El Niño, a meteorological phenomenon associated with the Pacific Ocean. In recent years the country’s coastline has sustained heavy damage from flooding associated with El Niño, and scientists think that the weather phenomenon may be increasing in frequency and intensity as a result of global warming. A poor country, Peru is hardly up to the task of confronting climate change and has had difficulty coping with tropical disease outbreaks linked to global warming. Meanwhile, across South America Brazil has had to deal with strange, hurricane-like storms linked to warmer ocean temperatures in the Atlantic.

As if Peru and Brazil didn’t have their hands full enough they must now contend with an even greater environmental emergency in the Amazon jungle. The Earth’s forests remove large quantities of carbon dioxide from the atmosphere and most of this carbon gets locked up in living and decaying vegetation. The world’s tropical forests perform a vital function, as they collectively absorb approximately 4.8 billion tons of carbon dioxide annually, and the Amazon is the single largest rainforest sink. Now, however, El Niño has led to intense droughts in the Amazon, which has resulted in forest fires and the release of tons of carbon back into the air.